Production Science are proud to have been involved with the NATO 2014 Summit in Newport, South Wales. We were responsible for Network and IT services and Power provision across the main site at Celtic Manor and satellite venues at Cardiff Castle, Royal Welsh College of Music and Drama, and Royal Navy type 45 Destroyer HMS Duncan, servicing delegations from 70 countries, including world leaders such as President Obama and David Cameron. 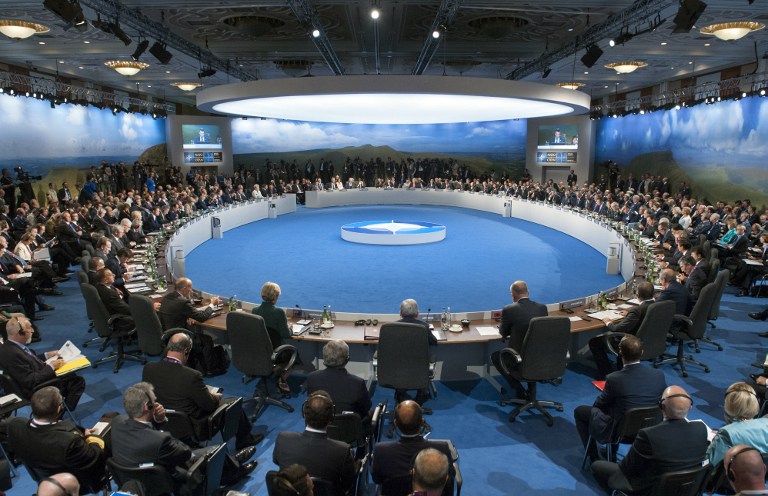 TOPSHOTS
Leaders hold a meeting on Afghanistan during the NATO 2014 summit at the Celtic Manor Hotel in Newport, South Wales, on September 4, 2014. The NATO summit billed as the most important since the Cold War got underway with calls to stand up to Russia over Ukraine and confront Islamic State extremists. AFP PHOTO/SAUL LOEB

The network on a project of this scale was particularly challenging, with an extensive 10Gbps backbone being deployed on a site stretching over several miles with fully redundant Fibre Optic links to all areas of the network. A multiple security layer model was provided, with on and off site firewalls and data cleansing centres.

Wired, Wireless and Print services were provided in a large double deck Temporary Media Centre and 10 Media Conference venues, to service the requirement for 2500 journalists, photographers and broadcasters from the world’s media. Production Science consulted extensively in the design and provision of the internet services and firewalls for the event, working closely with BT and the UK Foreign And Commonwealth Office to provide the services on time and in a fully redundant design. The event had 3 x 1Gbps connections to the main site and 3x 100Mbps connections to the satellite sites, with ADSL backup.

We also provided temporary power to areas including media centre, broadcast facilities, press conference and the main meeting rooms. Celtic Manor Resorts power supply was deemed to be unsuitable for a high profile event of this nature as there would have been a delay in changeover in the event of a mains failure. We teamed up with Aggreko and installed 14 generators and over 15KM of temporary cabling across the event including installation on board HMS Duncan. All temporary electrical systems were designed with 100% redundancy via synchronised generators.