The Syria conference, on 4 February 2016, was co-hosted by the UK, Germany, Kuwait and the United Nations and saw world leaders challenged to agree a comprehensive new approach on how to respond to the world’s biggest humanitarian crisis. They were tasked with raising significant new funding to help millions of people whose lives have been torn apart by the devastating civil war. 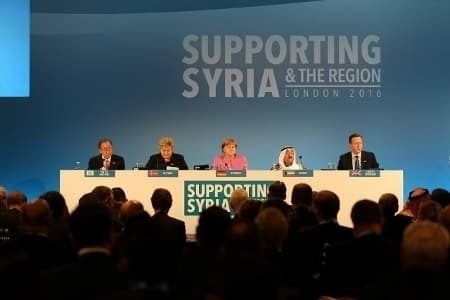 The day opened with speeches by the co-hosts – who included David Cameron, UK Prime Minister and German Chancellor Angela Merkel – before plenary sessions were broken up with dynamic content in the form of films, video link-ups and speakers from NGOs and the private sector. A livestream enabled viewers to tune in to the conference online, in real-time, from anywhere in the world.

Themes covered humanitarian, economic opportunities and jobs, inside Syria, including protection of civilians from harm, and education.

Security was of paramount importance at this third major international aid conference on Syria. It was the first conference to invite Syrian delegates to attend. The production team worked closely with the Met Police, government and other agencies ahead of the event.

The world’s media congregated at neighbouring Central Hall Westminster, to use the media filing facilities, with wifi, wired network , print services, IPTV and broadcast power all provided by Production Science.